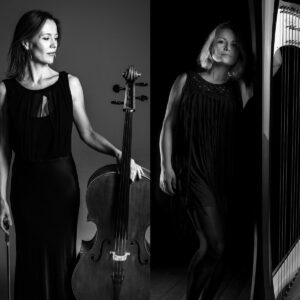 “Their playing throughout reflected their personal rapport: warm, responsive, almost telepathic in their communication of fine detail.”

“The arrangements were so fresh and new that it was if one was hearing them for the first time”. William Ruff @ReviewsGate.

“Two of the most talented and intelligent musicians I’ve had the privilege to work with. Bringing impeccable technique and sensitivity to everything they do they are also much more in tune with the meaning and intention of the material than many musicians.” Harvey Brough Composer & Musician

An exquisite meeting of cello and harp in the hands of two passionate and committed musicians. Clare O’Connell and Eleanor Turner have combined forces to explore their unique sound world, creating music old and new, classical and contemporary, inspired by influences from many different traditions including renaissance, rāga, and Scottish folk.

Cellist Clare O’Connell plays as a soloist and chamber musician.

Since founding Behind The Mirror, her concert series based in Berkhamsted, Clare’s practise has developed into a mixture of performing, writing, arranging and curating projects in which she collaborates with musicians and artists who inspire her. She commissions many new works from living composers & has made her own arrangements of numerous pieces of music for unusual groups of instruments, as well as writing her own compositions.

Clare is a member of visionary ensemble Lontano and the Storytellers Ensemble, and is a regular collaborator with many other chamber music & chamber opera projects. Over lockdown she arranged, recorded and produced her debut solo album The Isolated Cellist, a deeply personal collection of ancient & modern music for solo and layered cello which was released by Stone Records in April 2021.

This year she has performed the solo part of Cheryl Frances Hoad’s work for cello & ensemble ‘Katharsis’ with the new music ensemble at Oxford University, and given the world premiere of “Figures of Eight”, Edmund Finnis’ duo for cello and double bass which she co-commissioned with bassist Elena Hull. She was one of four solo cellists performing in Laura Jane Bowler’s new opera The Blue Woman at the Royal Opera House and at Snape Maltings, Aldeburgh; and will be performing throughout the year with musicians & collaborators such as Liam Byrne (viola da gamba), Tom Rogerson (piano), Eleanor Turner (harp), Milos Milivojevic (accordion), Viv McLean (piano), Jack McNeill (clarinet) and Daniel Pioro (violin). She is currently developing her second solo album of contemporary music with NMC.

Clare is a graduate of Wadham College, Oxford where she studied Ancient & Modern History followed by postgraduate study at the Royal College of Music & the Hochshule für Künste in Bremen, Germany with internationally acclaimed cellist and teacher Alexander Baillie. She plays on a cello by Stefan Krattenmacher.

Eleanor Turner is a passionate ambassador for the harp and its music. She is an international prize-winning artist who has performed everywhere from Shanghai to New Orleans and is an expert in contemporary music, winning second prize in the 2011 Gaudeamus Interpreters Competition in Amsterdam. Outside of classical music she most enjoys co-writing hiphop tracks and is as much at home in the studio with rappers as she is with classical vocal group Voces8 or recording her own music for film and television.

In recent years, Eleanor has released classical discs on Champs Hill Records, Decca, Naxos and her own label, Arts in Fusion. She creates pioneering shows such as ‘Wild Bird’ for harp with string quartet, flute, clarinet and percussion, and workshops such as ‘Philo Sophia’, a discussion-based event sharing feminine wisdom. Her latest imagining is Sanctuary, a live music-based reflection for which she has curated, and often performed, since February 2022.

During the tumultuous two years just passed, Ellie has honed her production skills, recording remotely at home and in nearby venues. With Elizabeth Bass and artist Iñaky Turner, she created a pack of 35 practise cards called ‘Enso Cards’, inspired by Japanese aesthetics and culture, as well as personal study. Together with Keziah Thomas, she created an online course for intermediate harpists and hot on the heels of that will be a course for harpists who wish to learn how to loop!

Eleanor started learning the harp at the age of 5, thanks to her Scottish mum Valerie loving music and being a fan of Harpo Marx. She studied with Daphne Boden at the Royal College of Music Junior Department every Saturday for 7 years and made her London concerto debut at the age of fifteen, with the Academy of St Martin in the Fields conducted by Daniel Harding and broadcast live on Classic Fm. Eleanor was privileged to take harp lessons with Alison Nicholls for seven years, culminating in Eleanor winning the European Harp Competition in 2007.

Eleanor creates Indian-western fusion music with tabla player Mendi Singh in their duo, Tala Tarang, who are currently being supported by the Arts Council with a grant for developing their creative practise (they have been working together already for eight years). Eleanor’s artistic development has also been supported by awards from the Tillett Trust, the Ambache Charitable Trust, PRS Foundation for New Music, Ralph Vaughan Williams Trust, Help Musicians UK, the Park Lane Group, Sound and Music and a Wingate Scholarship.