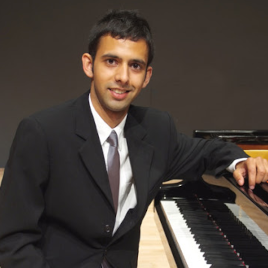 Alexander Soares has performed across the United Kingdom in such venues as the Royal Festival Hall and Purcell Room, Southbank Centre, The Barbican Centre, The Wig-more Hall, The Bridgewater Hall, Manchester, and has also performed in major venues across France and Spain.

He was a Park Lane Group Artist from 2010-12, under whose auspices he gave his London debut recital, and currently holds Making Music’s Award for Young Concert Artists and he comes to us under that Making Music scheme.