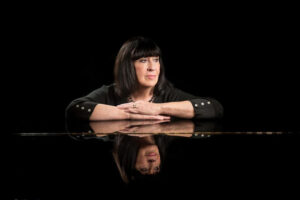 Programme to be confirmed

“One of the world’s finest pianists.” New York Times

At the age of seven, Angela was hailed as a genius by Max Pirani who adjudicated a Beethoven piano competition which she won in the City Hall, Hull. Constantly improvising and composing, a year later several of her compositions were published. By the age of ten, she had performed her first concerto, and the same year, won the Lorna Tetley Prize for young pianists and shortly after was asked to broadcast a recital. At twelve, she made her debut in London’s Wigmore Hall and throughout her teens appeared as concerto soloist in many parts of the UK, on tour in Germany and in Norway where she broadcast the Grieg Concerto live in Stavanger, aged thirteen.

She later won a piano scholarship to Edinburgh University and after graduating B. Mus., was awarded a further scholarship for a twoyear period of study with Guido Agosti, in Rome. She continued her studies in London with Maria Curcio, winning the Arts Council International Piano Competition. Since then, she has appeared in major venues worldwide and with many major conductors and orchestras, recording twenty-five CDs for EMI, BMG, ASV, Hyperion, United, Classic FM and Cameo Classics. Several of these have been selected as Critics Choice in the UK and as Record of the Year in the Absolute Sound magazine of America. Her recordings include the first collections of works by Gershwin, Samuel Barber and Kenneth Leighton.

Critics have compared her with such legendary pianists as Solomon, Rachmaninov, Cherkasky, and Bolet. She began her life in an atmosphere of freedom and individualism almost impossible to find today, and, under the guidance of Maria Curcio, herself a pupil of Schnabel for many years, she learned to deal with the differing requirements of a varied range of composers which recalls Cortot in his prime. In an age that has become obssessed with mere technique and seeks a degree of perfection offered by over-edited CDs, Angela’s playing restores spontaneity, character and beauty of sound to the platform.

Although regarded as “a major star in classical music”, Angela’s musical world includes works with a jazz element. She has recorded an album with some of the jazz greats such as Ike Isaacs (guitar) Jeff Kline (bass) and Phil Seaman (drums), and has appeared live with Jools Holland. She is much in demand as a lecture recitalist, in masterclasses and as a mentor for Talent Unlimited which supports students from the Royal College and Royal Academy in London.