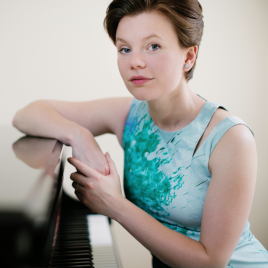 Clare Hammond, who played for us in 2012 and 2014, has more recently appeared as the young Miss Shepherd in the film of Alan Bennett’s “The Lady in the Van”. In 2015 the Guardian described her as a “dazzling athlete” following her performance at the Barbican Hall, and she was invited to perform as part of the “In Tune” Christmas special, her fifth appearance on BBC Radio 3 that year.