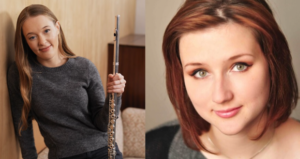 Emma Halnan first came to prominence as woodwind category winner of BBC Young Musician 2010. She has since appeared at major venues worldwide, and has performed concertos with orchestras such as the London Mozart Players and the European Union Chamber Orchestra. Other competition successes include the Sussex Prize for Woodwind in the Royal Overseas League Competition 2019 and first prize in the Sir Karl Jenkins/Arts Club Award 2016. Emma was been selected as a Making Music Young Artist 2018-20, and is a City Music Foundation Artist.

Emma is a highly reputed and very dedicated teacher. She teaches privately, for the University of Cambridge, and at Trinity Laban Conservatoire. Her pupils have gained places in national ensembles and at various conservatoires (both junior and senior departments).

As a soloist Jaynne has performed concerti with orchestras including the Iasi Philharmonic, the Orchester Musikfreunde Bremen, the Deutsche Rundfunk Orchester, the Ranaana Symphonette, the Bilkent Symphony Orchestra and the London Soloists Ensemble, in venues including the Berlin Philharmonie, the Queen Elizabeth Hall, St Martin’s-in-the-Fields and the Bremer Glocke. Recent performances have included a tour of China that took her to twelve cities, playing the Beethoven Emperor Concerto. As a song accompanist, Jaynne has performed recitals in venues including the Wigmore Hall, the Holywell Music Room, the Haus der Kunst in Baden bei Wien and the Schubertiade Schwarzenberg.