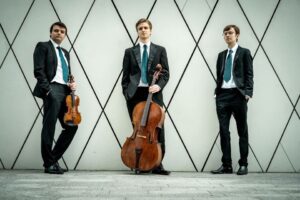 Praised for their ‘exquisite phrasing’, ‘full-blooded commitment’ and ‘bold, passionate colours’, the Mithras Trio is fast growing a reputation as one of the next generation’s most exciting piano trios.

Formed in 2017 at the Guildhall School of Music and Drama, they benefited from regular tuition with Matthew Jones, Carole Presland and Ursula Smith, and have also received coaching from András Keller, Caroline Palmer, Rolf Hind, David Dolan and the Endellion String Quartet. They have performed in masterclasses with Ralf Gothóni, Levon Chilingirian, the Takács, Danish and Emerson Quartets, and Alasdair Tait, and have undertaken residencies in Snape Maltings (Suffolk) and at the Schulich School of Music (Montréal) performing to professors including Isabel Charisius, Byørg Lewis, Kyoko Hashimoto and the St. Lawrence String Quartet.

They are currently members of the prestigious BBC New Generation Artists scheme, broadcasting regularly on BBC Radio 3, and won first prize at the 10th Trondheim International Chamber Music Competition, 67th Royal Over-Seas League Music Competition, Cavatina Intercollegiate Chamber Music Competition 2019 and the St. James Chamber Music Competition 2018, and in 2019 were recipients of the Royal Philharmonic Society Henderson Award. They have performed at many of London’s major venues, including Queen Elizabeth Hall, Purcell Room and Milton Court Concert Hall, as well as making regular appearances in festivals in the UK and Europe. They were selected as Kirckman Concert Society Young Artists for the 2019/2020 season, and are currently on the Countess of Munster Trust Recital Scheme.

They are also passionate exponents of contemporary music, having worked extensively with Helen Grime and Julian Philips, and gave the world première of a new piece by Péter Tornyai at the Solti Hall in Budapest, who dedicated the work to the Mithras Trio after working with them.