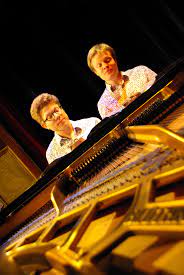 Duo b!z’art is a Belgian piano duet for one and two pianos, founded by André Roe and Geoffrey Baptiste in 2004. Duo b!z’art regularly give concert tours in the UK, Scandinavia, Baltic Republics, Croatia, Slovenia, Switzerland and China.

André Roe graduated from the Royal Conservatories of Liège and Brussels. He obtained numerous awards for young musicians in Belgium, France and Italy, including Dexia Classics as well as the Peleman’s Prize awarded by the Belgian Composers Union.

André shares his love of music with the public with the duo b!z’art, but is also as an orchestral player. He frequently collaborates with many orchestras, including the Luxembourg Philharmonic Orchestra, the Luxembourg Chamber Orchestra, the Liège Royal Philharmonic, playing the piano part of Petroushka, The Firebird, Carmina Burana, Carnival of the Animals and the glockenspiel part in Mozart’s Magic

André passes on his passion as an accompanist and piano teacher at the Ettelbruck Music Conservatory in Luxembourg, having taught at the Royal Conservatories of Liège and Brussels as well as at the « Institut Supérieur de Musique et de Pédagogie » in Namur.

Having always been attracted by playing music with other people and by the pleasure of communication it provides, it is not surprising that, at the end of his studies at the Conservatorys of Liège and Brussels, Geoffrey Baptiste pursued a career as a chamber musician and orchestral pianist.

He founded three chamber music ensembles: the duo b!z’art, the duo dzeta (piano and violin), and the trio Oxymore (piano, violin and clarinet). In addition to chamber music concerts, Geoffrey has given over 100 concerts as a piano and celeste player within the Liège Royal Philharmonic. He also works with the Luxembourg Philharmonic Orchestra and the Philharmonie Zuidnederland.

In parallel with his artistic activities, Geoffrey shares his passion for music as a piano teacher and accompanist in several music academies. He is also a winner of various competitions in Belgium, France and Italy, including Dexia Classics where he was honoured as a chamber musician and as a concert pianist.