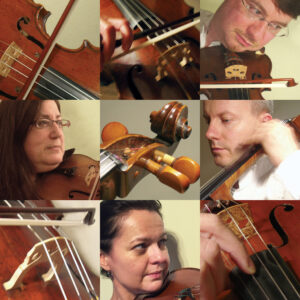 Quartet Camerata has played for us several times in the past. Established thirty
years ago, the quartet has performed throughout the UK to critical acclaim at
venues including St John’s Smith Square, the Victoria & Albert Museum,
Cambridge University’s Madingley Hall and the Chelsea Arts Club. The quartet
has also given a series of concerts in France, featured on BBC Radio, and
performed for Her Late Majesty The Queen. Quartet Camerata performs
regularly at festivals and music clubs. It also gives music appreciation concerts
and has successfully combined elements of its repertoire with dance projects,
prose and poetry readings. The quartet has participated in masterclasses with the
Alberni String Quartet and studied with Roger Coull and Andrew Watkinson.
The quartet supports a number of good causes and has helped to raise thousands
of pounds for local and national charities – most recently helping Ukrainian
orphans, the Luton Food Bank and a clean water charity in Tanzania.

Peter Bussereau studied at the Guildhall School of Music whilst at
London University. He has played with many of the country’s leading orchestras
and is currently a member of the BBC Concert Orchestra.

Anna Dryer-Beers studied at the Royal College of Music and has played with
many orchestras and chamber ensembles, including the Salieri Quartet and the
Lydian Trio with Catherine Wilmers and Thea King.

Judit Kelemen joined the BBC Concert Orchestra in 2017. Prior to this she had
an adventurous professional life, playing in the Budapest Festival Orchestra,
and both the Malaysian and the Qatar Philharmonic Orchestras.

Peter Randall has studied privately with Joan Dickson, Harold Strube and
David Smith of the Alberni String Quartet. Peter is a member of various
ensembles and has performed chamber music for music societies throughout Britain.